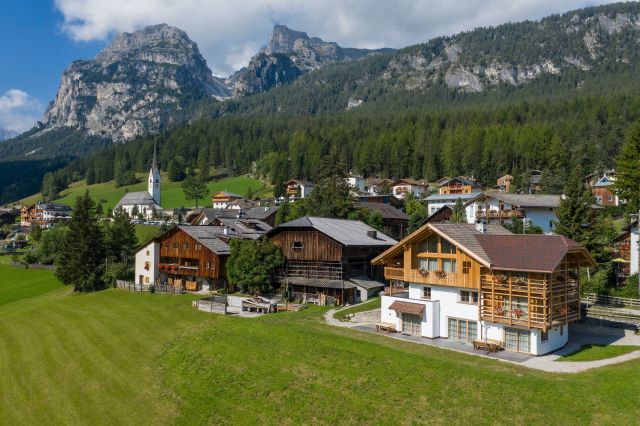 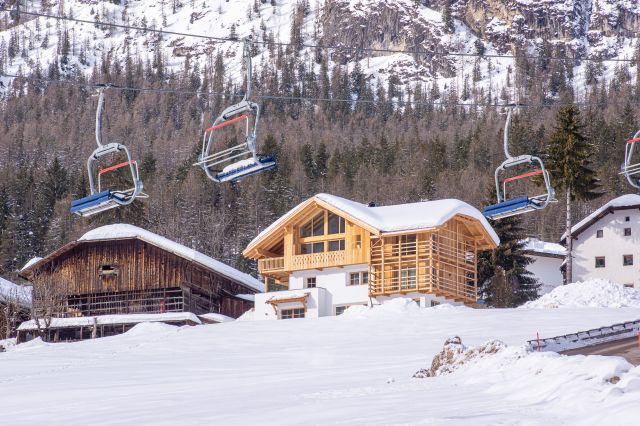 The ideal apartment for every kind of holiday in Alta Badia

The enchantment of a holiday in the Dolomites of La Villa

The Pizzinini family is pleased to welcome you to their cosy apartments Picenin in La Villa, Alta Badia. Among the most famous peaks of the Dolomites you can discover the true soul of Val Badia, wild nature, Ladin flavors and traditions. The Picenin apartments have been designed to offer guests every comfort and to make every holiday in Alta Badia unforgettable. They are the ideal starting point for walks, excursions and skiing days and allow you to relax and feel at home just a stone's throw from the village center. 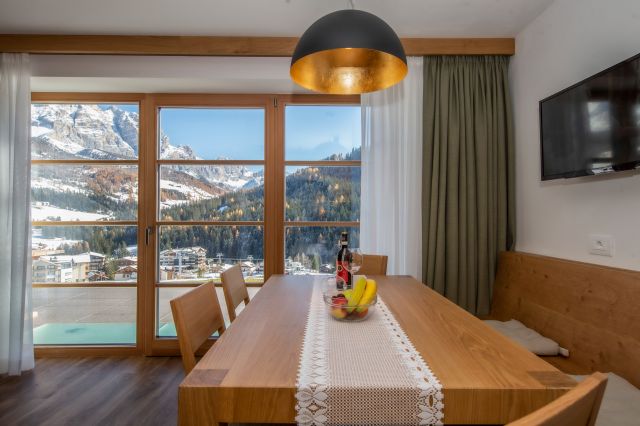 Precious details for a perfect holiday in Alta Badia

At the Picenin flats your holiday in La Villa turns into a perfect, carefree time full of discoveries. The flats are equipped with every comfort, starting with the spacious and fully equipped kitchen with dishwasher. Some flats also offer the possibility of adding a room with private bathroom, to increase the comfort and privacy on holiday. There is also a ski room with boot warmers and a laundry area with washing machine. The garden of the Picenin house is equipped with tables and chairs. Private parking is available in front of the house.

Read more...
go to top
Discover our Apartment “Enzian” in our new Apartment House Picenin, nr. 51. A breathtaking view on the mountains of Sasso S. Croce, La Varella, Conturines and Piz La Villa is awaiting you.
from
45 €
per person /
per night

61
6-8
The ideal accommodation for large families! It consists of 2 double rooms with the possibility of adding a third bed, and two bathrooms. The living...
Details

The ideal accommodation for large families! It consists of 2 double rooms with the possibility of adding a third bed, and two bathrooms. The living area offers a kitchen with a very spacious living room with a comfortable double sofa bed. On request, it is possible to connect a third double room with private bathroom. The flat is located on the ground floor and overlooks the large sunny meadow with enchanting view towards Sasso S. Croce, La Varella, Conturines and the Piz La Villa with the famous "Gran Risa" slope. 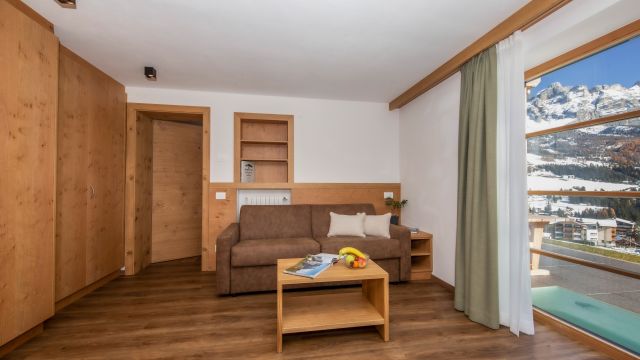 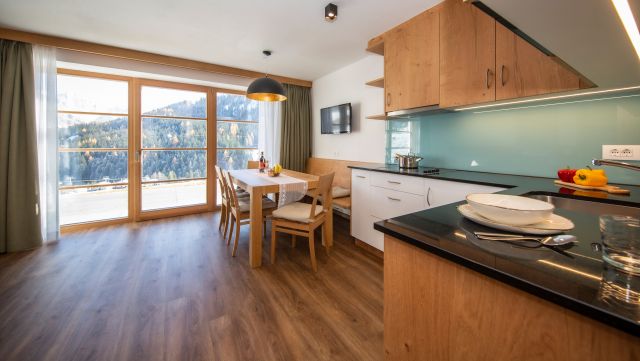 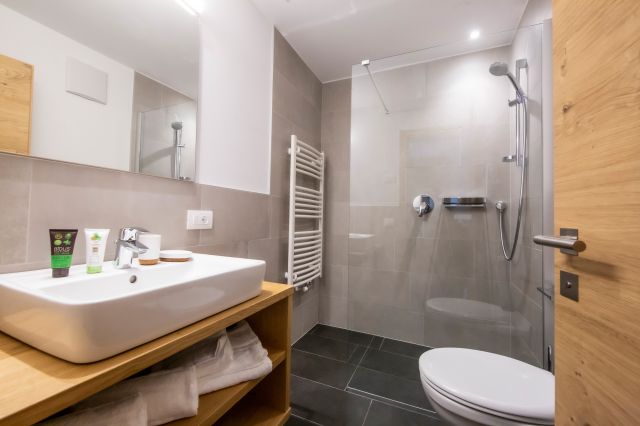 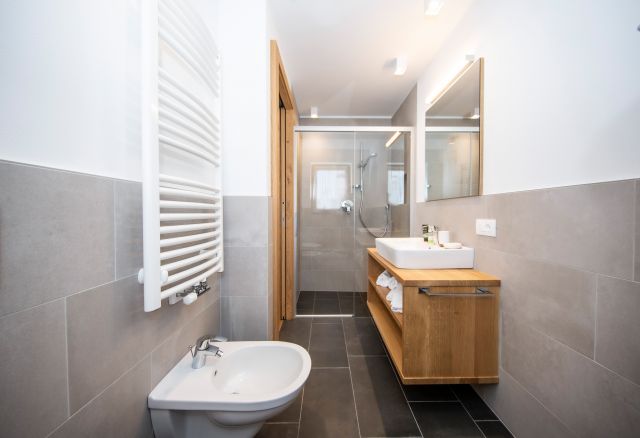 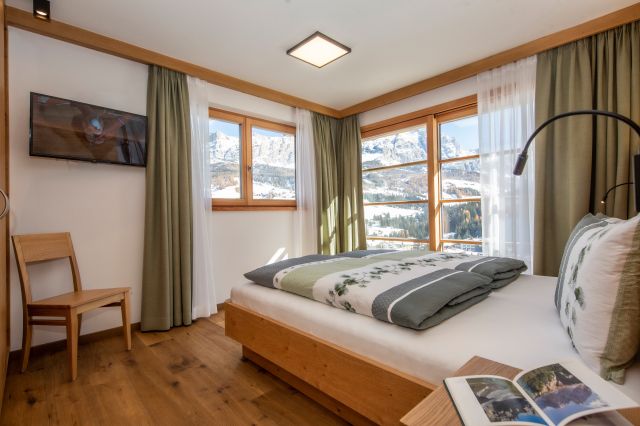 SLIDE
go to top
Discover our Apartments “Edelweiss“, “Alpenrose“ and “La Stüa” in our new Apartment House Picenin nr. 57, with a view on the Gardenaccia-mountains.
from
35 €
per person /
per night

38
2-4
The apartments Edelweiss is located on the ground floor and consists of a bright living room with a fully equipped kitchen, a single sofa bed and a...
Details

The apartments Edelweiss is located on the ground floor and consists of a bright living room with a fully equipped kitchen, a single sofa bed and a spacious double room, which offers the possibility of adding a third bed. The bathroom has a washbasin, toilet with bidet and shower cubicle. The flat overlooks a pleasant garden. 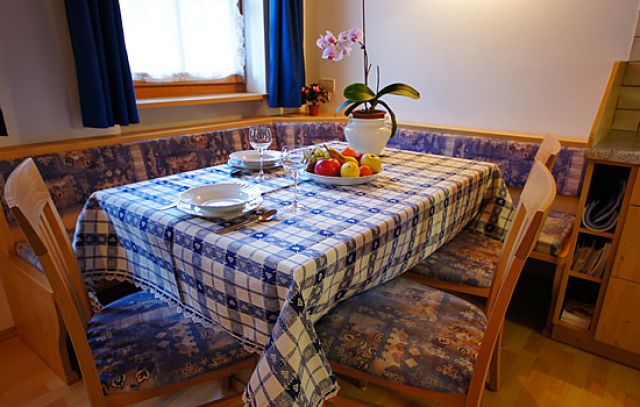 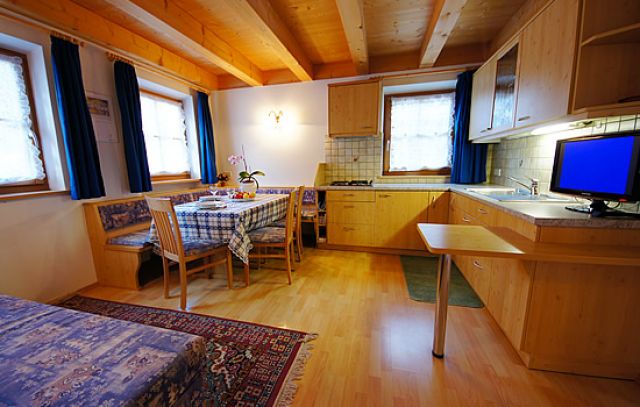 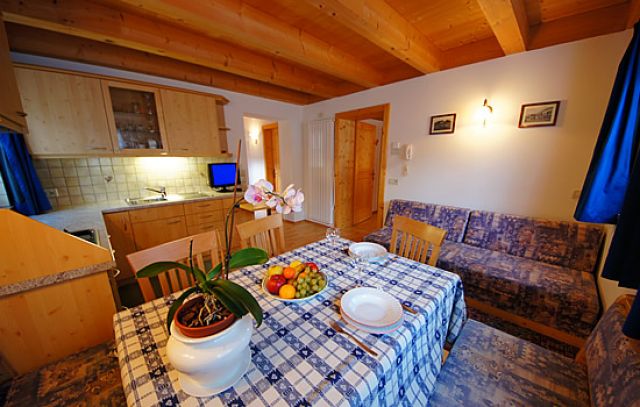 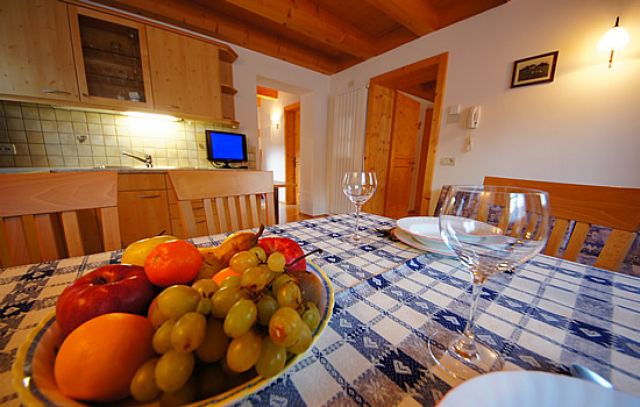 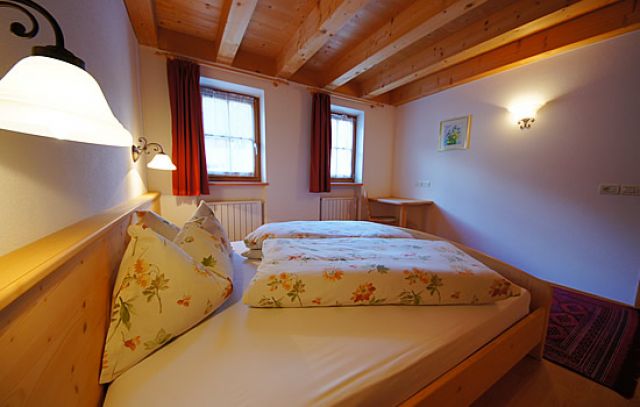 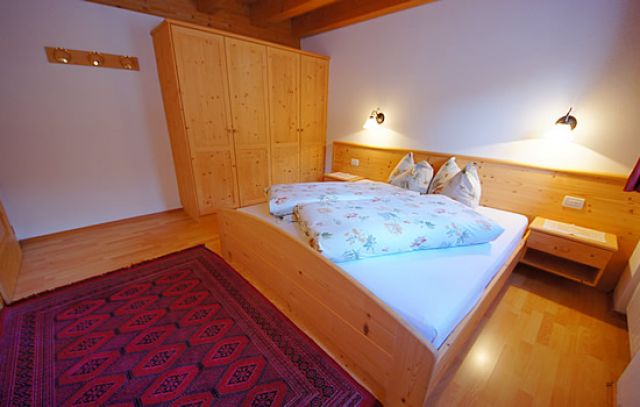 55
4-5
The apartment Alpenrose is located on the first floor and has two double bedrooms, two spacious bathrooms, a fully equipped kitchen and a bright...
Details

The apartment Alpenrose is located on the first floor and has two double bedrooms, two spacious bathrooms, a fully equipped kitchen and a bright living room. In the living room there is a single sofa bed and, on request, it is possible to add an extra single bed in one of the two rooms. The flat has its own private garden. 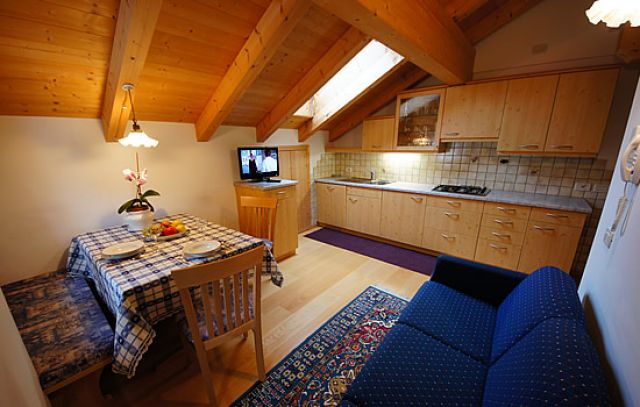 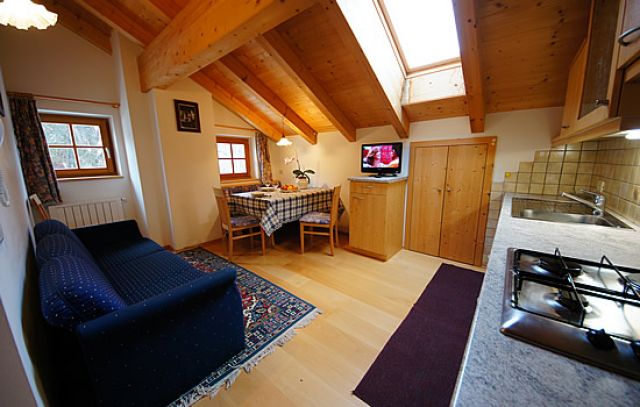 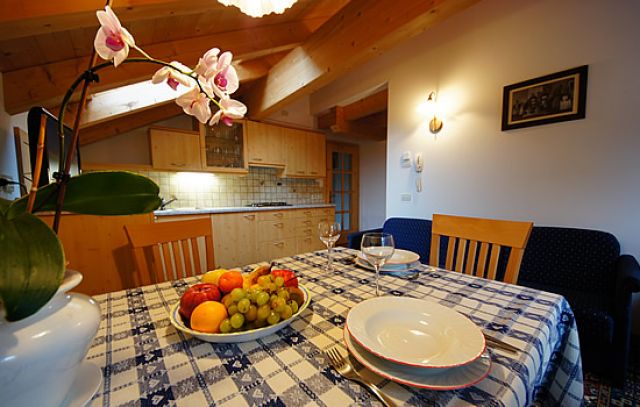 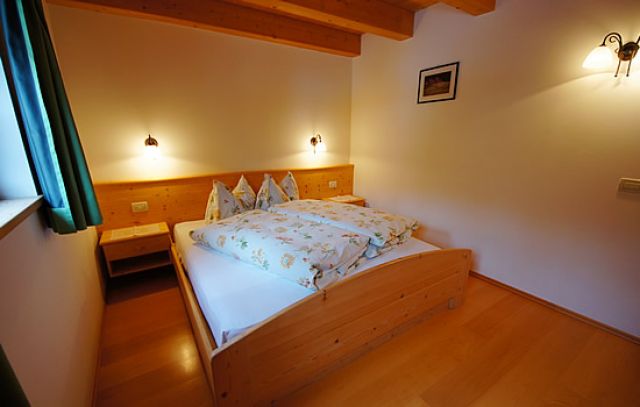 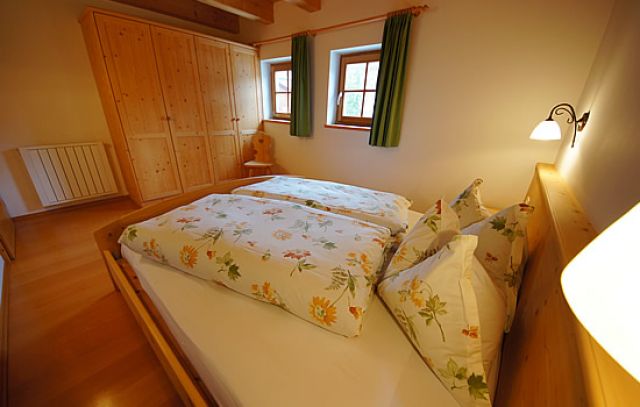 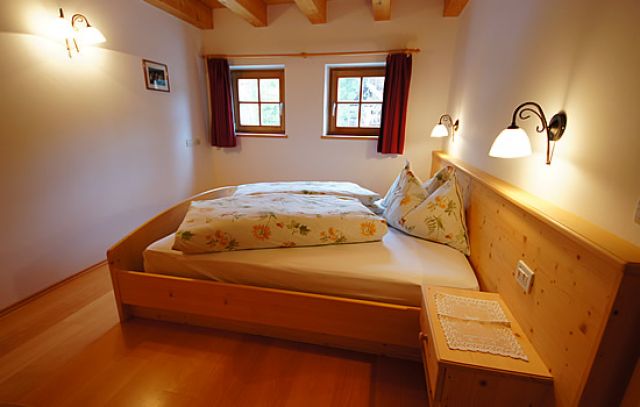 73
4-6
Located on the ground floor, the apartment La Stüa surprises with its generous rooms, such as the spacious living room with double sofa bed and, on...
Details

Located on the ground floor, the apartment La Stüa surprises with its generous rooms, such as the spacious living room with double sofa bed and, on request, the possibility of adding a third bed. The separate kitchen is very spacious and fully equipped and the bathroom has a shower and tube. In addition to the double room, there is the possibility of adding a twin room with private bathroom on the upper floor, which can be reached by an internal staircase. 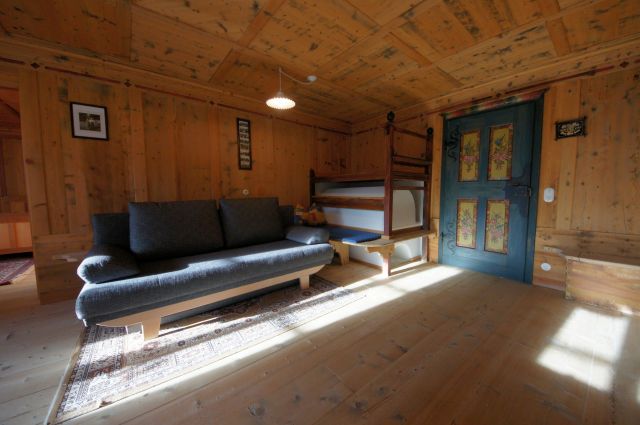 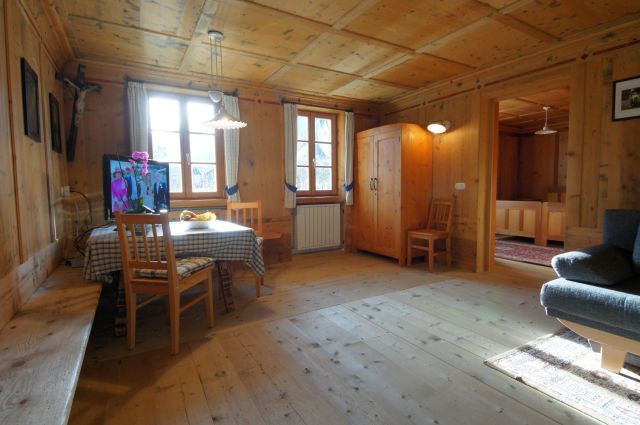 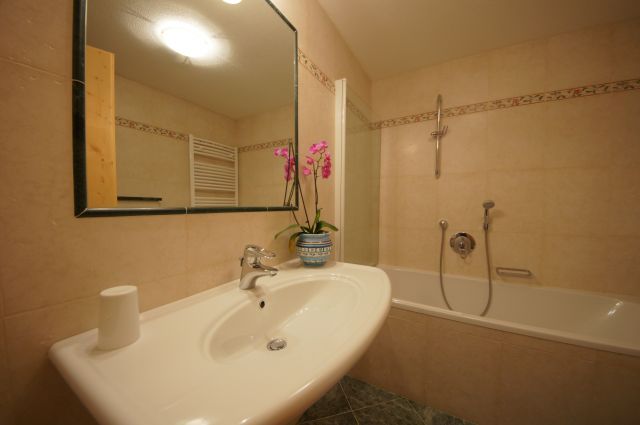 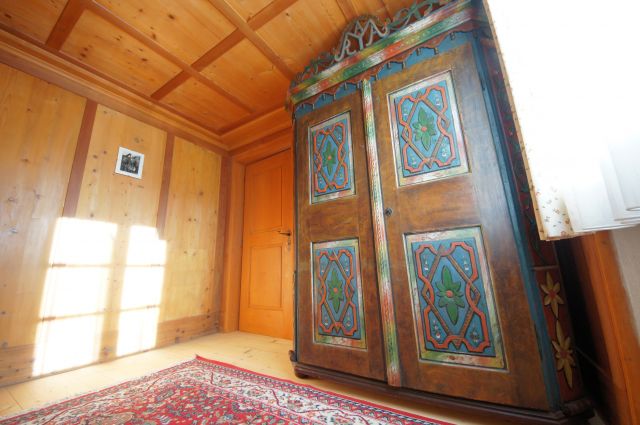 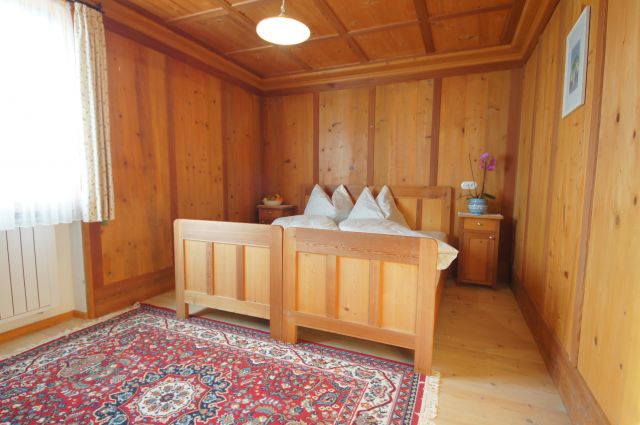 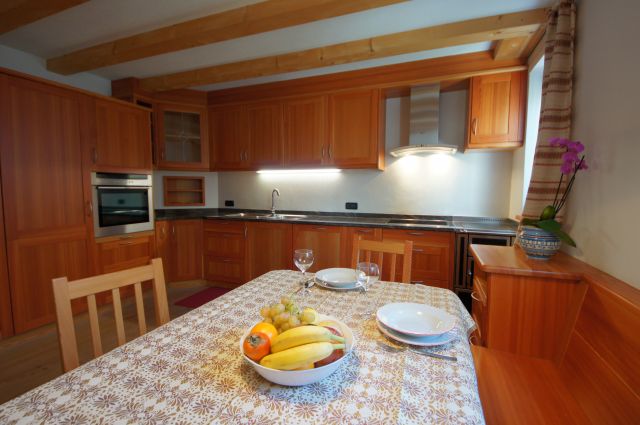 La Villa Alta: breathtaking views and comfort around the corner

The Picenin holiday flats are located in the charming area of La Villa Alta, the historical part of the village, which enjoys an unforgettable view of the Sasso Santa Croce and Gardenaccia. However, the centre of La Villa, with its shops, supermarket and bars, is only a 5-minute walk away. In winter, you can leave the house directly with your skis to reach the Doninz ski school and the Piz la Ila cable car or the Colz chairlift, which connects the local lifts to the Sellaronda. Opposite the Picenin flats there is the Gran Risa, the slope that hosts every year the Alpine Ski World Cup. In summer, the famous "Maratona dles Dolomites", the bike race that leads over the steep Dolomite passes and demands everything from the participants, passes directly by our house Picenin: cheer on the cyclists during the last extremely steep climb over the “Craw Wall/Mür dl Giat” from your balcony! 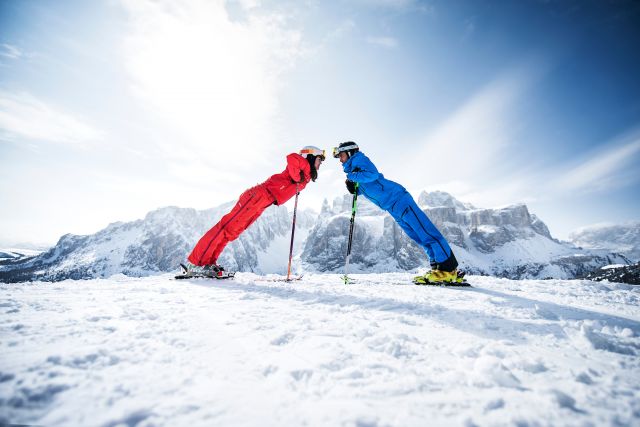 The spectacle of the Dolomites, 365 days a year

Anyone coming to Alta Badia cannot help but admire the spectacle of nature in the Dolomites and its famous nature parks, such as the beloved Fanes-Senes-Braies park and the Puez-Odle park. In those protected areas you can find the typical fauna and flora of this mountain area and an infinite number of marked trails, suitable for all levels of experience, to explore the forests and peaks of the Dolomites. In winter, when everything is tinged with white, the Alta Badia ski area is an irresistible attraction for all snow lovers. Alta Badia is in fact part of the famous Dolomiti Super Ski area and boasts modern ski lifts, panoramic or adrenaline-filled slopes, ski schools and high altitude refuges where you can rest and enjoy a typical dish between one descent and the next.

All the advantages of a holiday in Alta Badia

Do you love the most authentic Dolomites, the contact with unspoiled nature and the wonderful slopes of Alta Badia? Check out our advantageous offers: do not miss the opportunity. One click and you are on holiday in Alta Badia!

AltaBadiaSuperPremiere
At the beginning of the ski season you get one ski day for free.

These are your benefits:

The offer is valid only in ski rentals/ski schools participating in the promotion.

Enjoy a holiday in the heart of the Dolomites...